Apprenticeships are the way forward in Wigan Borough 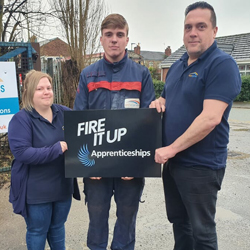 A Wigan Borough teen is encouraging his peers to explore apprenticeships after securing a job in the engineering industry.

Keon Smith, 16, is employed by MAP Engineering in Lowton and has recently started a three-year engineering apprenticeship after his employer sought funding from Wigan Council.

A few months into his new role, Keon is keen to tell other young people about the benefits of an apprenticeship in comparison to going into full-time further education. He said: “It’s so much more motivating to learn while on the job. Being hands on means I can practice and earn while also getting a qualification.

“Having a job means that I can be more independent and have the freedom to have my own money.
“And an apprenticeship also means that I get to see all of the different roles available in the industry and try them out so I can figure out what direction I want to go in.

“Getting straight into work has helped with my confidence both in and outside of work because I have to try new things.”
MAP Engineering accessed Wigan Council’s Apprenticeship for Young People grant – a pot of money earmarked for supporting the borough’s young people into apprenticeships in the manufacturing, construction, engineering and digital industries.
Caroline Denton is the office manager at MAP. Speaking about the grant, she said: “Without this it would have taken us much longer to get an apprentice in post.

“The process was really simple and the fact the council were able to do a lot of the work meant that all of the stress with sourcing training providers and finding the right course was taken away from us.”

In addition to the AYP grant, MAP have secured funding from Lloyds Bank through a Greater Manchester ‘levy matchmaking service’, which will allow them to upskill an existing employee through an apprenticeship later in the year.
The service, delivered by the Greater Manchester Combined Authority, aims to match small-medium sized businesses with larger companies who pay an annual apprenticeship levy to the government.

The idea is that larger businesses transfer some of their unspent funds to a smaller non-levy paying business so they can provide new apprenticeship opportunities.

Ms Denton continued: “After we were successful with the council grant, the team told us about another opportunity we were eligible for.
“It’s meant that in the space of year, we’re able to help develop two apprentices.
“Investing in apprentices is really important because it brings fresh perspectives to a company.
“Instead of recruiting someone who has experience and may use traditional ways of working, we’re able to capture new ideas, while also giving a young person a head-start.”

Councillor Molyneux, who is also cabinet member for economy and regeneration said: “Young people are our future and it’s important that we mentor them so our borough can grow and thrive.

“We understand that an individual’s learning experience should be tailored to them. Some people develop much better when they can learn on the job, experiencing first hand how to navigate the industry they’re keen to join. That’s why apprenticeships are so important.

“There is also a lack of people entering the manufacturing, engineering, digital and construction industries, which is why I was keen for the AYP programme to target these professions. In the first year, we’ve had an amazing take up and have worked closely with a number of businesses who have provided opportunities for the next generation of leaders.”

The council also supports the Greater Manchester #SeeDifferent campaign, which gives local authorities money to encourage businesses in other fields to recruit apprentices of all ages.

Councillor Molyneux continued: “Although we have a great apprentice provision locally with the AYP fund, we’re in an enviable position to also have support from the GMCA so we can provide even more money to businesses wanting to help our young people.

“The AYP funding is specific to certain industries but the #SeeDifferent pot means that businesses in other fields aren’t missing out.”