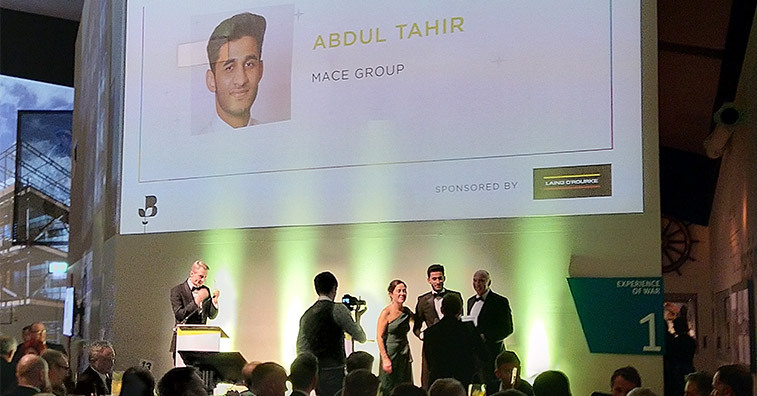 This article has been taken from the following website – https://www.totalpeople.co.uk/news-blogs/construction-apprentice-of-the-year

It was celebrations all round on Thursday 3rd October, as Abdul Tahir was named Apprentice of the Year at the Greater Manchester Building of the Year awards.

The awards, held at the Imperial War Museum as part of the GM Chamber Property & Construction Awards Dinner, aim to recognise the contribution that construction is making to the region.

As part of this, the Steve Burne Apprentice of the Year Award is given, to celebrate excellence in construction apprentices.
Among the three finalists, Abdul was nominated for his exemplary attitude and dedication to the projects that he has worked on during his apprenticeship.

Abdul is on a Level 4 Construction Management apprenticeship scheme – M Futures – that has seen him rotate his experience with leading employers working on major design and build schemes in the city, including Manchester City’s Our Town Hall redevelopment with MACE.
Speaking to Total People after the event Abdul said;

An award, to me, means a bonus. It’s not that anyone works for an award but, when you get an award, it is encouraging and inspiring and reminds you that you need to do well. I am honoured to receive the Steve Burne award and so incredibly proud of my entire team at Our Town Hall.

Currently an M-Futures apprentice with Total People and MACE, Abdul is benefitting from this innovative scheme which provides construction-focused, higher level apprentices with the chance to work with organisations shaping the city’s skyline, including Manchester City Council, development company Manchester Life, property company Bruntwood and architects Purcell, over a two year period.

Congratulations Abdul! A fantastic achievement and we look forward to supporting you in your continued success.​
While applications for M-Futures 2019 are now closed, if you are interested in being part of next years scheme we’ll soon be updating information on future M-Futures intakes.